Give life to the heritage and culture passed on to us

Proud Irish Heritage is based in Galway, on Ireland’s west coast on the Wild Atlantic Way.

The population of Ireland today is about 4.9 million people, but it is estimated that 70 to 80 million people around the world have Irish forebears, making the Irish diaspora one of the largest of any nation. Historically, emigration from Ireland has been the result of conflict, famine and economic issues. The Irish diaspora refers to ethnic Irish people and their descendants who live outside the island of Ireland.

It is our desire to make it possible for all those of Irish descent and those with a genuine link to Ireland to obtain an inexpensive displayable document declaring their bond and fondness of Irish Heritage and Culture. The Certificates recognizes the recipient as descendants of Irish emigrants, to having the entitlement and birthright as persons of Irish ancestry, to champion and celebrate their Irish culture and their proud Irish heritage.

The Certificate is not an official document, nor a certificate of citizenship, nor does it give the holder the rights or entitlements of a citizen of Ireland. But it does recognize those of Irish heritage in a practical way to express their sense of Irish identity that’s felt by millions of the Irish diaspora. It is our objective, by issuing the Certificates, to maintain the strong ties between Ireland with communities around the world, now and in the future.

As on St. Patrick’s Day, when the whole world feels Irish, these certificates are a physical manifestation of those sentiments. The Certificates are designed to be a beautiful and meaningful display for those who are conscious of their Irish heritage and feel a strong affinity for Ireland.

In 2011 the Irish Government launched the Certificate of Irish Heritage scheme. The Certificate was a practical expression of the importance the Government attaches to recognising people of Irish descent and encouraging people to trace their roots. But by 2015 the scheme was discontinued. This was due to many reasons including:
• the process of application with ancestral documentation needed to prove eligibility was far too complicated.
• the designs, although nice may not have been obviously Irish at first glance.
• the cost of the Certificates and waiting period was considered excessive and drawn out.

The Eligibility Criteria included providing appropriate supporting documentation connecting them to an individual Irish ancestor. The applicant had to provide copies of personal documents including a scanned image of their ID eg: a driving license, passport or national identity document. They at to also produce: a scanned or downloaded image of their ancestor supporting documents. Eg: a birth certificate of Irish ancestor, baptismal/marriage/death certificate of ancestor showing place of birth, land records, wills, census records, ships manifests or immigration records. To obtain the Certificate the descendant also had to present the names of all the people in the line of descent between the person requesting the document and their ancestor.

Those wishing to give the Certificates as gifts to others, such as child for their baptism, birthday or other occasion were met with obstacles as each applicant had to apply individually and provide the required information and documentation in order to receive the Government issued Certificate.

Overall it was felt the scheme was costly, poorly thought out and involved far too many different entities public and private.

Proud Irish Heritage hope to counteract all of those issues and make the issuing of Certificates to those that wish to celebrate Irish Heritage and Culture a lot faster, easier and less expensive.

The Certificates are available for instant download once the order is received. There is no waiting for document approval between Government departments or other organisations.
The customer can personalise their Certificate online, inputing the minimum amount of information. They can style the design choosing from a number of Irish design elements such as Book of Kells borders and parchment paper backgrounds.

These Certificates make gifting them to children and other persons an economical and significant gesture. The Certificates can be passed on from generation to generation – they are are a link between generation and generation, ancestor and decendant.

With these Certificates we can generate interest in Irish Heritage, preserve knowledge of our ancestors customs and traditions and we can give life to the heritage and culture they passed on to us. We should not and shall not ever forget them.

Some of the Recipients of The Certificate of Irish Heritage include: Barack Obama, Bill Clinton, Tom Cruise, Caroline Kennedy, Daniel Day Lewis, and Lord Sebastian Coe.

“Furthermore, the Irish nation cherishes its special affinity with people of Irish ancestry living abroad who share its cultural identity and heritage.”

Article 2: The Constitution of Ireland

Become part of the Irish Story

So many of the Irish we are proud of, and that inspire us may not have been born in Ireland but in their hearts and ours they are 100% Irish. They often publicly announce pride in their Irish Heritage.

You too can become part of the Irish story by passing on our Irish Heritage, Culture and Traditions. You can show your pride in being part of this global Irish family by sharing your stories, your parents and grand parents stories of Ireland and their journeys and experiences.

The Proud Irish Certificate is one way to display and pass on our Heritage to future generations. It is a document that declares your and their interest in their Irish background.

This beautifully crafted certificate will be passed on from one generation to the next ensuring the memory of our ancestors, and to the Irish legacy they bequeathed us will continue long into the future. 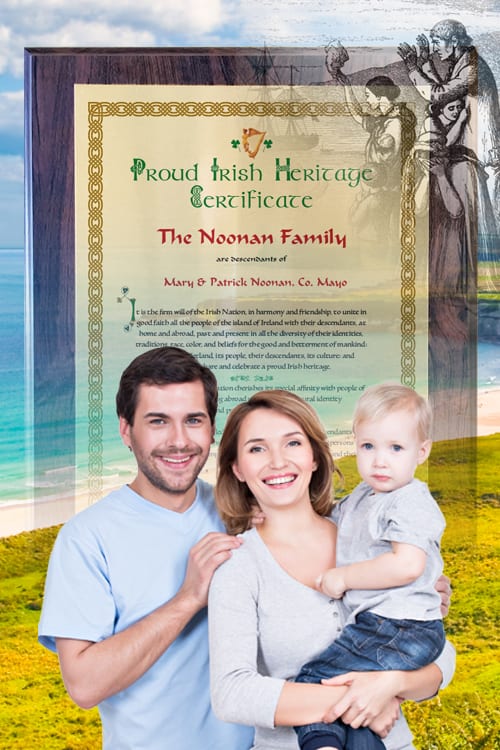 “They lived and loved and laughed and left. ”